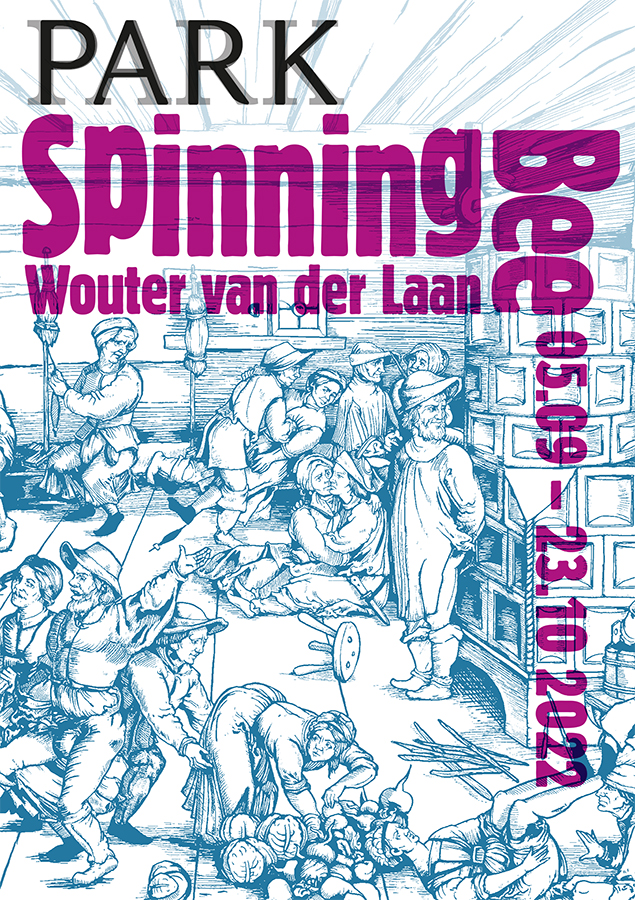 Wouter van der Laan (NL) was previously a participant in the group exhibition Promising in 2018 at PARK. With his installation Spinning Bee he continues the presentation he showed at the Rijksacademie during OPEN STUDIOS 2022. In recent years, Van der Laan has been making a small-scale textile workshop, which he spontaneously set up at the Rijksacademie. This workshop is based on a woodcut by the German printmaker Hans Sebald Beham, depicting a village spinning room.

Beham's woodcut shows us the medieval tradition of spinning rooms. In these spinning rooms, spinning and weaving went hand in hand with informal exchange of knowledge, precisely through textiles. At the time, there were rumours among the authorities that these spinning rooms were nocturnal meeting places for immoral behaviour and orgasmic excesses. They were said to serve as a platform for social and sexual experimentation among (young) villagers. Ultimately, the spinning rooms were forbidden because of their subversiveness and fell into oblivion.

In his workshop, Van der Laan explicitly links the tradition of textile craftsmanship with the parallel tradition of coming together and making things together. His space is both functional and the setting for this tradition. As an artist, Van der Laan has a critical attitude towards the focus on the end product in the artistic process and individualism, and for this very reason he looks for relational and shared moments. Historical examples, such as the textile craft, inspire him in this.

In the setting of Spinning Bee, social layers are directly interwoven with textile craftsmanship. PARK is located at an ancient intersection of paths, a so-called herdgang. The building, a former chapel, emerges from an entanglement of lines that once developed organically through the many movements of people across the 'common grounds'. Instead of man and shepherd, Van der Laan puts the herd first. In its collective, animal form, a herd cannot be captured in lines.

In PARK, with his spinning wheel and loom, Van der Laan creates a new fabric that is constantly transforming. His decor forms the backdrop to a performance, in which a link with music is also sought. A 2.3 m high tile stove, made in his textile workshop, brings the space to life as an altar. Formerly a place of gathering, the tile stove functions as a speaker for sound works in Spinning Bee. Here, Van der Laan makes the connection between song, rhythm and melody and the earlier forms of textile craftsmanship.